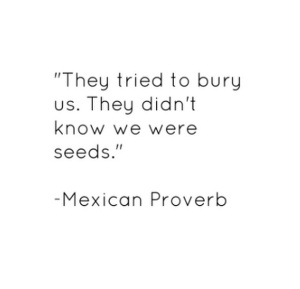 It’s been a crazy couple of weeks hasn’t it? Between the hostage situation in Sydney, Australia, the verdicts in the Eric Garner and Michael Brown cases, and the school shooting in Pakistan the world has a lot of reasons to lose hope. Today I came across this quote on someone’s Instagram and decided to use just a simple PicMonkey.com font to design for today’s blog post.

It was only ten words but it took my breath away. I thought it was such a simple and beautiful concept because it’s easy to feel defeated. It’s human to mourn death. It’s easy to feel scared about the future and to wonder what is wrong with the world today. But the important thing about this idea is that it causes us to see beyond the current horrors. Fields full of seeds can look dead before they sprout crops. And situations, people, and places can seem irrevocably damaged or evil but God is still at work here on Earth.

“For you have been born again not of seed which is perishable but imperishable, that is, through the living and enduring word of God.”

26-29 Then Jesus said, “God’s kingdom is like seed thrown on a field by a man who then goes to bed and forgets about it. The seed sprouts and grows—he has no idea how it happens. The earth does it all without his help: first a green stem of grass, then a bud, then the ripened grain. When the grain is fully formed, he reaps—harvest time!

In other words those of us who have accepted Jesus as Savior are full of God seed. We are not defined by time or death but are new creations who will live forever in community with our God. For those who are still committing evil here on Earth or living under the blindness of their sin, I try to remind myself that Jesus’s heart on the cross, though broken by what man has done, still had enough sympathy for us to say “Father forgive them, they do not know what they do”. I’m not saying the world events are right. I’m not saying they aren’t a big deal. They are. Any death is devastating. Any evil hurts to hear about. But ultimately I don’t want to live in fear or feel like the world has somehow come off its rotation and we’re all spiraling out of control. God is still on the throne, He is not hard-hearted towards the conditions on Earth. Instead, miraculously, He holds back for the sake of those who have yet to come to salvation. This is scandalous to us, but if we believe, truly that God is all-loving but also all-fair, we have to understand that while things look like they are dying all around us that God is still at work. Seeds of hope and life are still being planted no matter what the Enemy or evil-doers think they are destroying. I know that God wins at the end of all of this. Let that be our hope.